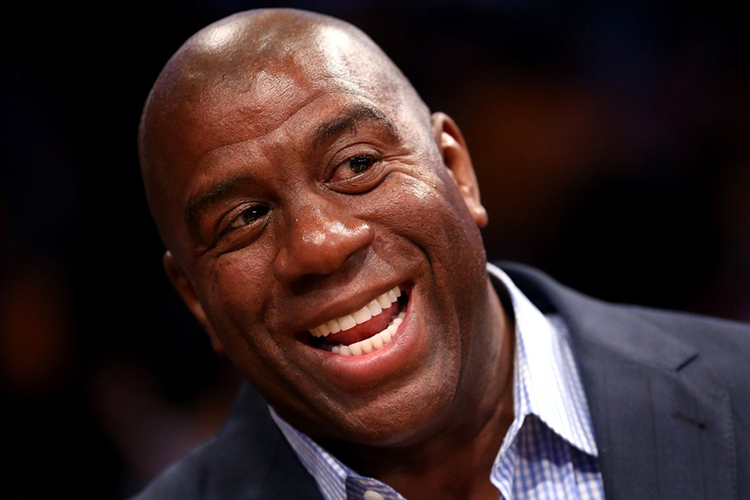 Magic Johnson is a retired basketball superstar-gone-entrepreneur. At the time of his retirement, Johnson had played 13 seasons with the Los Angeles Lakers and won a 12 NBA All-Star awards (among many others) doing it. His talent on the court earned him worldwide recognition, and in 1996 he was officially honoured as one of the 50 greatest basketball players in NBA history. Although he’s been retired since then, Johnson has been pursuing business ventures outside of basketball. Today, the five-time NBA champ is worth more than $500 million.

Johnson grew up in Lansing, Michigan where he led a fairly average life. Although his parents were blue collar workers they always put food on the table and provided for their seven children. Johnson says that he got his work ethic from them.

While growing up, Johnson fell in love with basketball and started spending most of his time on the court. By the time he reached 8th grade, he was already strongly considering a future in basketball. He was undeniably the best player on his school’s team, once scoring a ridiculous 48 points in a single game.

Although the majority of his games didn’t break 30 points, Johnson averaged an impressive 28.8 points and 16.8 rebounds per game (in high school). By the time he was finishing up high school, universities from all over the country were competing for his attention. Johnson ended up choosing Michigan State, mainly because it was close to home.

While in university, Johnson was pursuing a degree in communication studies and wasn’t seriously entertaining the possibility of playing professionally. That said, his college basketball career was so successful, that he felt compelled to at least give it a shot. He entered the NBA draft in 1979 and was the first overall pick – going to the Lakers.

His NBA career was extremely successful, but not without its share of ups and downs. For brevity’s sake, we’ll skim over it and take a look at some of his post-basketball ventures instead.

In 1991, Johnson tested positive for HIV, which caused him to retire immediately, in order to battle the deadly disease. Five years later he returned to the NBA to coach the Lakers during the 1995-96 season. Since then, he’s hosted a late night talk show – The Magic Hour, started his own record label, acted as an NBA commentator for seven years, and today he’s in charge of Magic Johnson Enterprises – a conglomerate worth more than $700 million. Some of the businesses owned by MJE are more than 100 Starbucks stores, a film studio, a nationwide chain of movie theaters, and dozens of others.

Needless to say, Johnson’s career has been very fruitful, and today the 57-year-old is living the life few of us can even imagine.

Together with his wife, Johnson lives in a Mediterranean home in sunny California. Just minutes from the beach, the 17 bedroom house reeks of luxury. Although we won’t go into details, this is too good to leave out. Johnson reportedly turned one of the bedrooms into a shrine of his basketball awards.

Although the retired all-star is certainly not sparing any expenses when it comes to treating himself or a loved one, he’s also doing quite a bit for those in need. Aside from personally donating thousands upon thousands of dollars to more than a dozen charities, Johnson has started a nonprofit of his own.

Shortly after discovering that he had tested positive for HIV, Johnson started the Magic Johnson Foundation. The main goal of the organization (you guessed it) was to raise funds for HIV/AIDS education and prevention programs.

On top of that he also regularly donates funds towards student scholarships, and most recently the basketball superstar wrote a $500,000 check toward the construction of a new Family Life Center at Oakwood University Church.