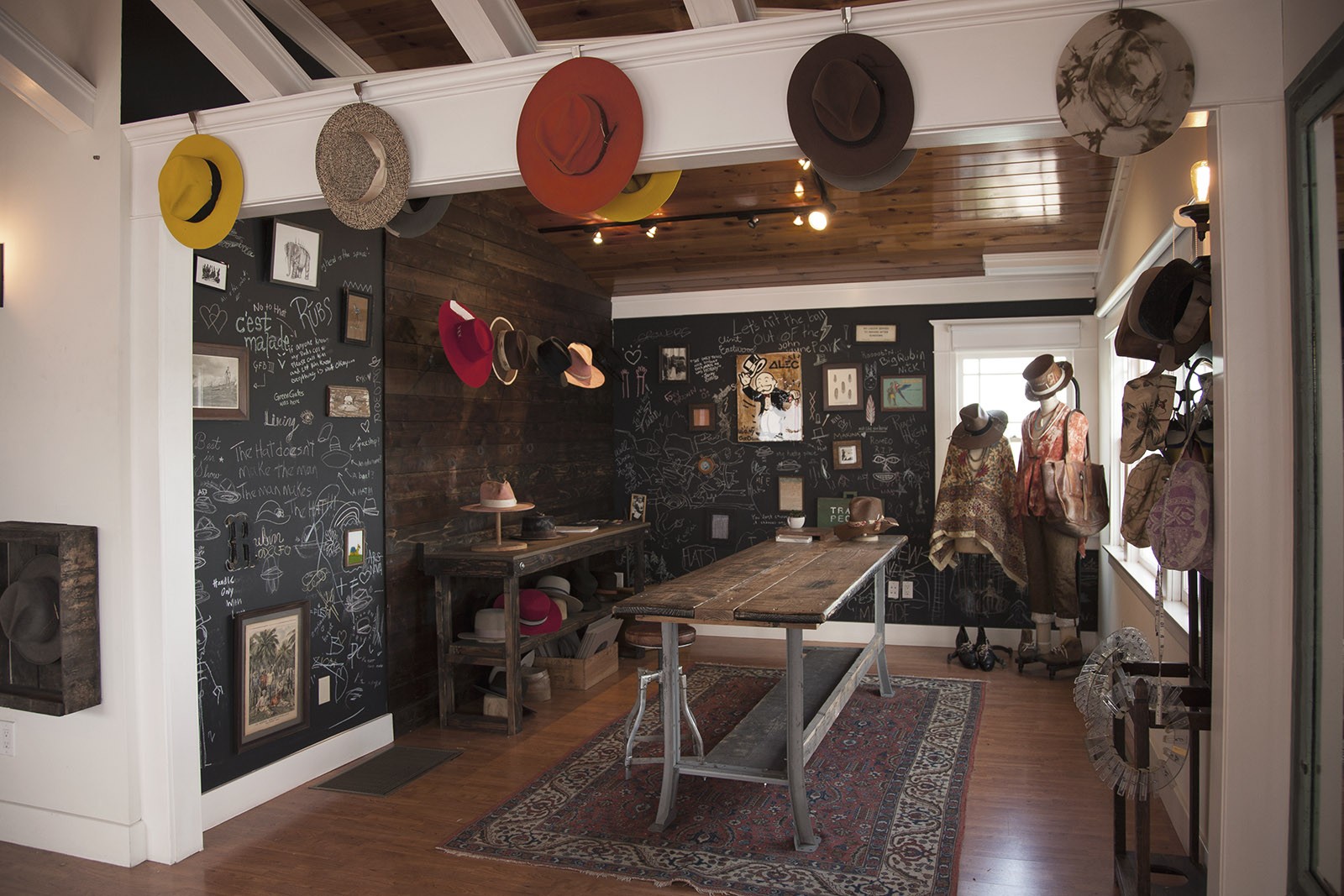 Tucked away on a corner off a busy street in Venice, California, in the back of a yellow storefront bungalow, past the cool boutiques and beach cafés, I find Nick Fouquet sweeping the patio behind his studio.

“We had a party last night,” he smiles, his sea-blue eyes lined with five o’clock shadows. Long and lanky as a greyhound in a fitted army-green t-shirt and faded Levi’s, sporting one of his signature wide-brimmed felt hats, he takes me inside his warm, soulful atelier, where incense is burning and Nirvana is blasting in the background.

The shop, resembling a kind of old-world tailor and hipster hangout, is filled with odd little mementos and vintage surf photos amid Stetsons, fedoras, trilbies and panamas meticulously arranged in glass cabinets and along counters and walls like pieces of art. His handmade boho-chic creations — artfully distressed with fire, dirt, paint and finished with irreverent little flourishes (strips of dead-stock fabric, a feather, a matchstick) have been worn by Pharrell Williams, Bob Dylan and Madonna.

“My first celebrity client was Billy Gibbons from ZZ Top,” he says reflectively. “It’s been amazing to see a brand grow and a lot of great people wearing my hats.I don’t want to seem like a global player or anything, but that people recognise the value and the worth of what I’ve been working so hard on is humbling.”

Although not everyone is impressed with his punky aesthetic. “When I started out, a lot of traditional hatmakers were appalled that I’d use fire and throw paint on a hat, distress the felt. And I was like: ‘You’re like, 80 years old, what do you know?’ We do hats that are classical and clean shapes, but we also do things that are a little different. I think in life that’s what you’re supposed to do.”

Born in New York City, he grew up in France and Florida, shuttling between his American mother Lavinia Baker and French father, the legendary model Bernard Fouquet, whom Nick unexpectedly followed into fashion after a photographer he’d met used him for a Ralph Lauren shoot.

“I’ve had a very successful year with both modelling and my business,” he tells me, slouched on a counter and eating a breakfast burrito. “Sure, modelling’s boring, but I enjoy being in an environment with a bunch of creative people — the photographer, stylists, make-up artists. The travel, the visibility and, at the end of the day, not to sound crude, but it’s money. You get paid very handsomely to be handsome and I’m very grateful for it.”

An adventurer and dreamer, Fouquet has lived and worked in far-flung locales, supporting himself with odd jobs and nurturing his soul. His life shimmers with some quirky gems: he stole his mother’s credit card and ran off to Patagonia and lived in the mountains with gauchos for six months; he studied environmental science and was going to become a forester in Colorado.

He eventually gravitated to California, lured by the mellow culture and climate. When he first came to LA, he worked in a shop for fellow Frenchman Christophe Loiron, the designer of retro-inspired workwear line Mister Freedom, who taught him production, cutting and sewing. “I was always obsessed with unique clothing that I’d alter, as I never wanted to wear the same thing as everyone else,” he says. “As a kid, I’d go to the French flea market and get these military buttons for my shirts and people always noticed.”

A chance encounter on Venice Beach, with “a cowboy from Ohio wearing this beautiful hat that he’d made himself”, who told him “there were only 25 cowboy hatmakers left in the US”, inspired Fouquet to make his own headwear and he began procuring century-old industrial machines from retiring milliners and initially set up shop in a Venice garage for a few years.

“I always wanted to be an artist and do my own thing,” says Fouquet who describes himself as a Californian bohemian with European sensibilities. He finds inspiration for his designs everywhere — from music, books, art galleries, the streets — and talks about “Otis Redding’s soulful music and the divine influence of the Beatles songwriting”, with a hum of excitement in his voice.

His more immediate plans are to expand his line, “but not out of greed, more out of ambition”, he’s quick to add. “I’ve begun working with this charity with the LA hospital, helping children with cancer and giving them hats. My mother does a lot of work with children, animals, rehabilitation programmes with alcoholism, drug addiction. She’s a nurturer with such a big heart. I recently realised that I don’t want to get into clothing but the little things such as homeware, where you step in and feel the life and the vibe of a place. The last thing we need in this world is more clothing. After being in the industry, I’m so turned off by the excess. I’d rather make a table or piece of furniture, something that’s more utilitarian and enduring. Even with the hats that we make they’ll be handed down because they’re quality pieces.”