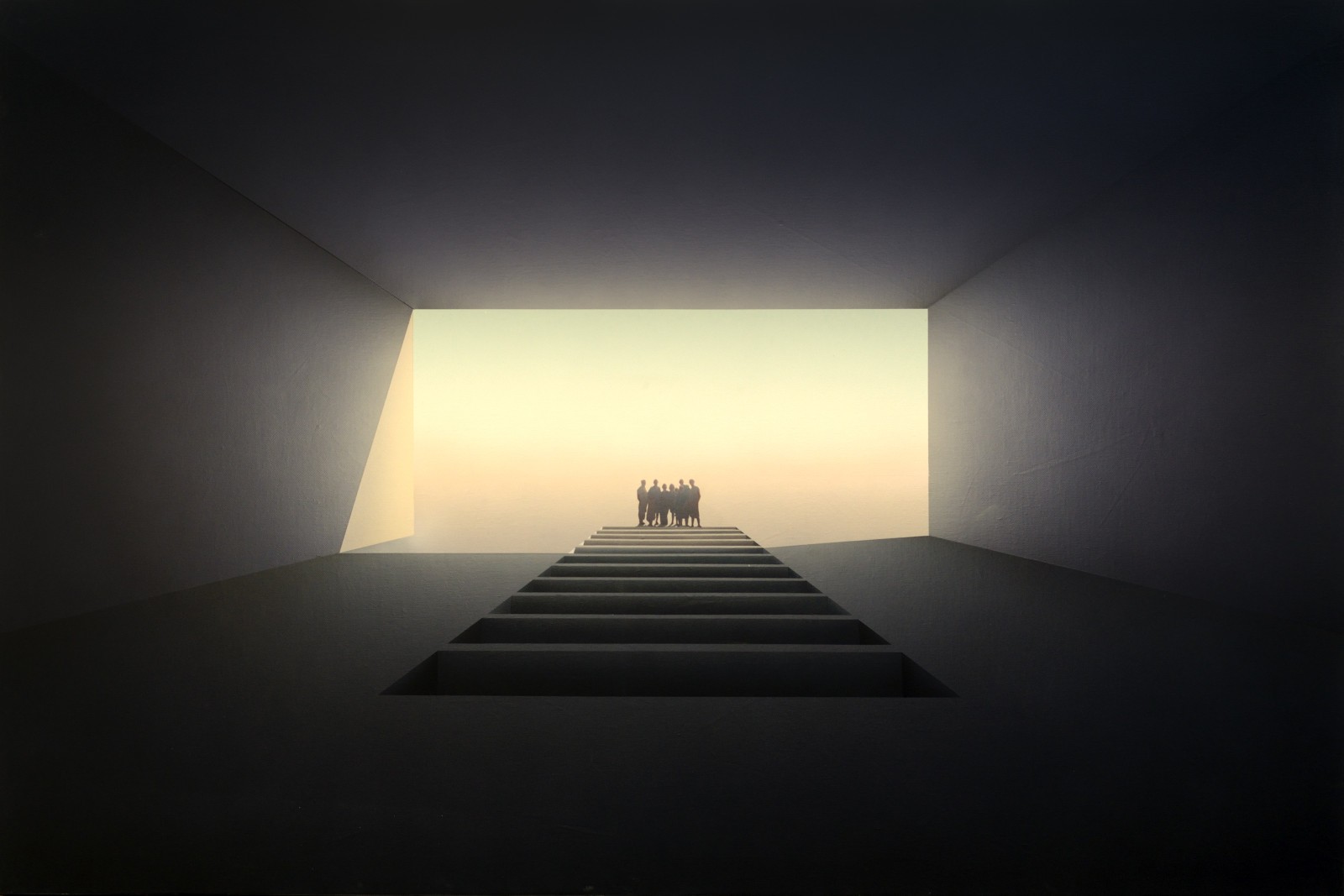 In 2016, Tehran Auction, Iran’s biggest auction, held two sales of classic and modern Iranian art, and contemporary Iranian art, smashing record prices to reach US$7m and US$3m in sales, respectively. One month into 2017, US President Donald Trump included Iran in a list of seven countries subjected to extreme vetting regarding entry to the US, and, at the time of writing, has put Iran formally ‘on notice’ after the country had tested a ballistic missile. Such critical events demonstrate keenly how the development of Iran’s cultural scene has long been inextricably bound with its political activity; both internally, in terms of how artists respond to issues of national identity and history, and externally; the exchange, both physical and intellectual, of art and artists internationally. At the beginning of 2016 thawing international relations underpinned a solo show by Belgian artist Wim Delvoye in Tehran, yet by the end of the year a proposed exhibition destined for Berlin, then Washington DC, of modern artworks from the Tehran Museum of Contemporary Art (TMoCA) was postponed indefinitely.

In spite of, or even because of, constant upheavals and turbulence, Iranian art has long been astonishingly rich and diverse, reflected in its flourishing presence in the international art market — especially so following the lifting of sanctions in 2016 — and in the city of Tehran. The last four decades have seen a thriving cultural scene coloured by progressive artistic tendencies; a new generation born in the years after the 1979 Revolution is less concerned with producing ethnic or political art, using traditional modes and iconographies, and more with forging an independent voice on a global stage.

Iranian art is fiercely and proudly unique, using its heritage but by no means bound to its traditions. Graphic artist Reza Abedini personifies this when he asserts: “For me, graphic design is totally art.” In his compositions, Abedini conceives of the Persian-Arabic script less as typography and functioning text, adapting the traditional calligraphic art form so it becomes a form of pure art, and pushing it to the limits of legibility by running the letters together, squishing into shapes to form silhouettes and patterns. He discards the regularity of Western graphic design, instead focusing on the capability of the text to carry a spiritual or poetic significance visually. This radical use of the historic Persian text is alone a political act — Abedini cites lithographs and paintings of the Qajar period as particularly influential, frequently copying their portrait format of a silhouetted figure against block colour – adapting an historic, traditional discipline for contemporary means. Although initially inspired by Western artists such as Kandinsky, Pollock or Warhol, and having studied graphic design at the School of Fine Arts taught according to Bauhaus principles, Abedini’s career now spearheads a strain of contemporary Iranian art strongly informed by its cultural heritage. Its importance has been recognised on a global stage.

Abedini’s studio is based in Tehran, a city that has thrived as an artistic centre open to cultural exchange, and, with the lifting of sanctions, has become something of a cultural hub. This is in spite of its political circumstance; Iran’s relative isolation is dictated by sanctions and the difficulty of market exchange with the outside, and artistic expression is compounded by restrictions enforced by the Ministry of Islamic Culture and Guidance. Isolated from the international art world’s recognised structure of galleries, auction houses and curators, these roles are blurred in Tehran, where the artistic community is forced into finding its own way of working. This is evident in flourishing exhibitions, lectures and talks, late openings and a strong art dealership.

A desire for outward exchange is matched in turn by the international art world’s eagerness to show and acquire Iranian art; the TMoCA in 2016 planned a show of modern art from Arab countries including the Saudi Arabia and the UAE, while the UAE itself has held major exhibitions of Iranian artists Parviz Tanavoli, Monir Shahroudy Farmanfarmaian and Farideh Lashai; Dubai’s market in particular has been responsible for the sale of much Iranian work, with Christie’s Dubai notably making Tanavoli’s sculpture Oh, Persepolis the most expensive Iranian artwork, selling for US$2.8m in 2008.

State intervention in the arts continues to be a problematic presence within Iran: controversially, the modern Western masters owned by the TMoCA have never been available for show, appearing only in censored format in 2012, with concerns expressed by many over conditions of storage. In the collection’s now-cancelled schedule to travel to Berlin in 2016, Europeans would have enjoyed a fuller experience than Iranian nationals. On the other hand, in 2016, for the second year running, the mayor of Tehran had all billboards and adverts replaced by works of art for 10 days, turning the city into a giant breathing art gallery. Tanavoli has long been celebrated as a giant of Iranian art since the 1960s, famously for his ‘Heech’ sculptures which adapt the characters representing the word ‘nothing’ in Persian, but in 2016 had his passport confiscated as he was about to leave the country; he had been due to speak at the British Museum.

Against this background, Mehdi Ghadyanloo is a remarkable case; born during the Iran-Iraq war (1980–88) and having lived and worked as a fine painter all his life in Tehran, he has perhaps the unique position of having been commissioned by both the US and Iran governments to create public art. Monumental in scale, yet playful in his use of surrealism and trompe l’oeil, brilliant colours and impressions of blue skies lend an upbeat, wondrous feel. In completing 100 such murals around the city, he has literally changed the face of Tehran. His murals also appear in the US in Boston, Los Angeles, and at sites in England and Norway.

Indeed, Ghadyanloo encapsulates the new artistic generation of Iran; the Boston mural was created at a critical point in the thawing of US-Iran relations following the historic nuclear deal. It remains to be seen whether he will fulfill works in the US given recent activities by the Trump administration. This illustrates the challenges the Iranian art scene and its emerging talent continues to face.