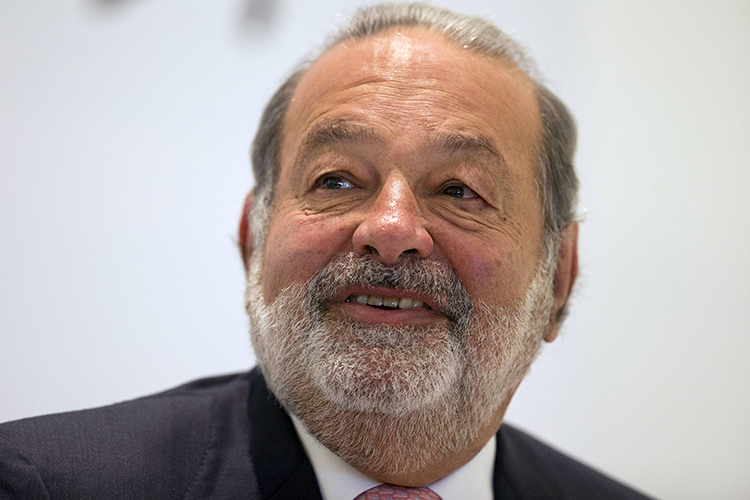 Carlos Slim Helu, or just – Carlos Slim, is a Mexican business magnate. Slim is often dubbed the “Mexican Warren Buffett,” for their similar investment strategies and staggering wealth. Like Buffett, Slim derived much of his wealth from well timed and carefully executed investments. Slim held the title of “wealthiest man in the world” for three consecutive years between 2010 and 2013. Today, he is no longer the richest man on earth, but his net worth is still estimated around an impressive $55 billion.

Slim developed his passion for business at a very young age. His father took it upon himself to make Slim financially literate. By the time Slim was 11, he had already made his first investment. Although it was just a government savings bond, it was the first step to building his multibillion dollar empire. As he was growing up, his father continued to advise him, and by the time he was 15, Slim was a shareholder in Mexico’s largest bank.

After highschool, Slim went on to study civil engineering. While studying, he developed a passion for mathematics, which years later gave him an edge when it came to reading financial statements. After graduation Slim didn’t put his engineering degree to good use.

Instead, he started selling stocks. Just four years after graduating from university, Slim managed to grow his personal savings to an impressive $400,000. He took this money and started a brokerage firm.

Since then, Slim’s portfolio grew to include companies from virtually every sector of the Mexican economy. Interestingly enough, the majority of his wealth can be attributed to the success of Telmex and America Movil, two of the largest telecommunications companies in Latin America. Today, Slim is the Chairman and CEO of both Telmex and America Movil. Although he’s at the ripe age of 76, and his net worth accounts for more than 6% of Mexico’s GDP, Slim isn’t even thinking about retiring.

Today, Slim’s fruitful investment career allows him to live a lifestyle that most of us can’t even imagine. For starters, he owns the $44 million Duke Semans mansion on Fifth Avenue. Aside from its iconic view of the Metropolitan Museum of Art, the 19,000 square foot mansion boasts 12 bedrooms, 14 bathrooms, and a doctor’s office. The living space is spread out over 8 floors, and due to its position next to some of the finest shopping outlets in the world, the Duke Semans mansion remains one of the last remaining private residences on Fifth Avenue.

In 2011, Slim opened the doors to the Museo Soumaya (named after his late wife). The museum features more than 60,000 works of arts, combined cost of which exceeds $800 million. The museum didn’t come as a huge surprise, considering that Slim had always been a huge fan of art. In fact, he owns 380 pieces of Auguste Rodin’s work, making him the largest private collector in the world.

When it comes to other hobbies, Slim enjoys racing and had previously expressed interest in buying his own Formula One team. That said, his own car collection leaves a lot to be desired – especially for someone worth billions of dollars. Slim owns a classic Bentley Continental Flying Spur and Navy Mercedes 4×4.

While he has more than enough money to be chauffeured around in any car on the market, Slim chooses to drive himself in the timely navy blue 4×4. What’s funny, is that when he cruises through the heavy Mexican traffic, his bodyguards follow closely in vehicles of their own.

Although he doesn’t shy away from indulging every once in awhile, Slim also makes sure to support those in need. He has become quite the philanthropist over the years, and donated millions of dollars to several charitable causes.

In 2007 he founded the Institute of Health Carlos Slim, with the goal of developing and funding programs that will solve major health problems in Latin America. Additionally, he donated more than $100 million to help combat poverty in Mexico, and his efforts have been greatly appreciated by the community.

To top it off, he has committed to donate at least $6 billion to the Telmex foundation, with the vast majority of the funds being allocated for health care and scientific research.