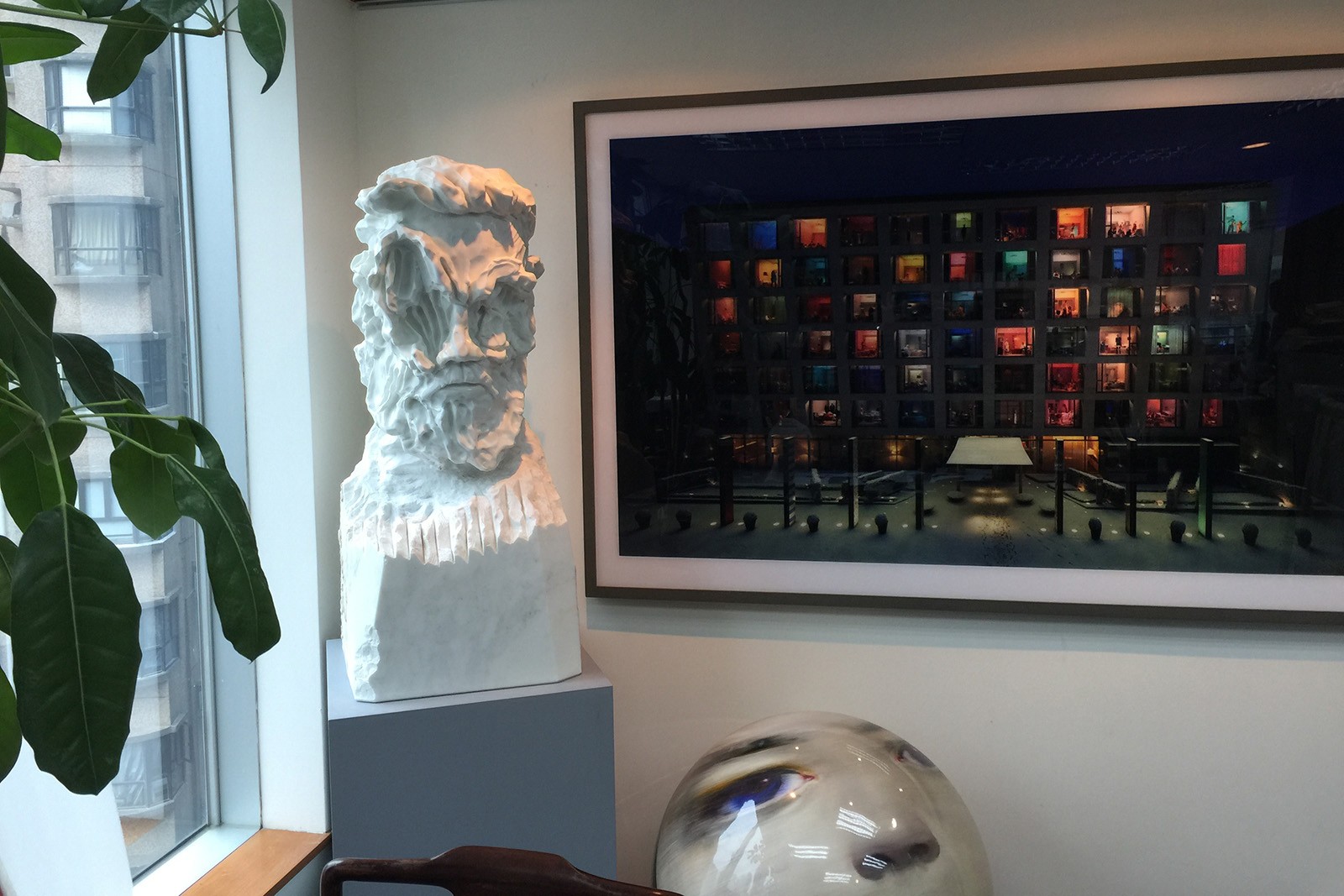 A visit to Howard Bilton’s office in Hong Kong gives a clue to the man who runs it. The space is crammed with an astonishing smorgasbord of contemporary art, photography, ceramics and sculpture. Some of it is shocking; most of it makes you look twice; all of it is well loved. Bilton, a Yorkshire-born lawyer, runs an offshore tax advisory firm called The Sovereign Group. Thirteen years ago he set up the Sovereign Art Foundation, a charity that has raised over US$4 million for worthy artistic causes. As a hobby, Bilton runs a vineyard in Portugal’s Alentejo region producing award-winning Syrah and Vinho Verde wines. He owns a stunning villa on Thailand’s Koh Samui island called Samujana, managed by his wife Susie.

Here he tells us about his favourite art works.

1. Crucifixion in a Landscape by Craigie Aitchison. This was the first piece of art I bought. I had to borrow most of the money but I fell in love with the painting as soon as I saw it and just had to have it. The painting is now worth 10 times what I paid for it but that is irrelevant as I will never sell it.

2. Bearded Man by Kevin Francis Gray. I saw a similar piece in the house of a friend and was massively impressed by the combination of tradition and contemporary. I arranged to go to Pietrasanta in Italy to the artist’s studio and meet with the traditional craftsmen whom the artist was working with to create these unique marble statues. They still use the traditional pointing tool invented in the 18th century to copy the plaster-cast model in marble.

3. Paradigm by Conrad Shawcross. I bought this piece at Art Basel Hong Kong last year. It is the maquette for the 40ft-high piece that sits outside the Clore Institute in St Pancras, London. The sculpture is simple but clever. It shouldn’t stand up as the weight is all at the top so the skill is in balancing the different tetrahedrons on top of each other.

4. Still Life With Flowers by Terry Frost. On the back of this is written the legend “to Frank Whitten, the man who taught me what real life was about”. Whitten was incarcerated in the same prisoner-of-war camp as Frost during the Second World War and taught him how to paint. Frost gave him this work as a thank you.

5. Winter Road Near Kilham and Summer Road Near Kilham by David Hockney. These are a pair of pictures from the series David Hockney did entitled ‘Drawing in a Printing Machine’. The real interest to me is that Kilham is a village in Yorkshire near where I grew up and somewhere I knew very well from my teenage years. There used to be regular lock-ins in the local pub and I know the view illustrated very well.

6. Two Live 8 posters by Peter Blake. The first poster was the art work that Peter Blake originally produced for the Live 8 event, intended to pressurise G8 leaders into cancelling third-world debt. It showed the G8 leaders wearing black suits sat behind a buffet table of food in front of a starving African scene. Bob Geldof thought it was too sombre and asked Blake to do another version. The second is virtually the same except the G8 leaders are wearing Beatles’ Sgt. Pepper’s uniforms.